Skip to content
They’ve brought a very serious contender for the Ram TRX. We’re looking at a Shelby GT500. Yes, a supercharged, 5.2-liter V8-powered muscle car. The Shelby GT500 is an amazing machine in every sense, and it brings 760 horsepower to the table and a maximum torque of 625 lb-ft (847 Nm). A dual-clutch, 7-speed automatic gearbox is in place, but given the cold weather outside, the GT500 is facing a huge challenge, due to it having rear-wheel-drive.

But this is the real world, it’s cold outside, the track isn’t treated with VHT, and to make things worse, the reviewer can’t really afford to do a burnout in the Shelby to warm up the tires, as the car belongs to someone else, and doing something like that just wouldn’t be common courtesy. Before getting to see the actual race, our ears are treated to an exhaust-battle, but you’ll have to decide a winner for yourself.

The Shelby GT500 gets a first practice run, and it becomes clear that putting all of the power down is going to be downright impossible. For the first official run, it gets a terrible start, and the Ram TRX immediately lunges forward winning the race by several car lengths.

A rematch is in order, and this time the GT500 uses its launch control for a better start. The Ram TRX is completely unfaded as it rushes across the finish line, gapping the Shelby once again. As this is not an actual drag strip, the only problem the TRX has is stopping after the race is over. The conclusion is that the challenge is going to be repeated under better traction conditions in the not so distant future, that should be more conclusive! 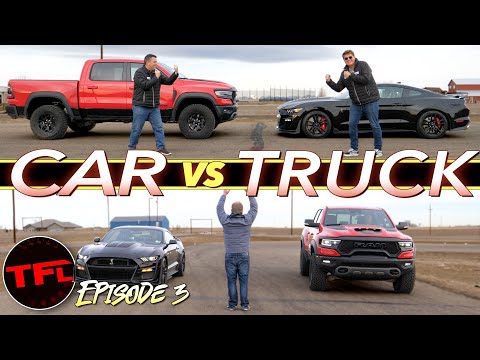 Used Honda Accord For Sale Near Me

Used Toyota Tacoma For Sale Close to Me