2021 Ford F-150 Raptor Finally Arrives, Is All About the Redesigned Suspension

2 months ago Larisa W. Gibson
The iconic Raptor was first released by Ford in 2009, and it quickly became the weapon of choice for those who wanted the most badass truck out there.

The latest model seems to have lost that title in favor of the insane Ram 1500 TRX, but that doesn’t mean it’s going to back down since Ford fitted it with all the latest tech at their disposal – except for a better engine.

Fans were hoping that this model will go back to a V8, borrowing the GT500’s Predator unit, but for now, the truck will use the same 3.5-liter V6 EcoBoost as its predecessor. Curiously, the carmaker hasn’t specified the powerplant’s output yet, but we’re expecting more than the previous model’s 450 hp. 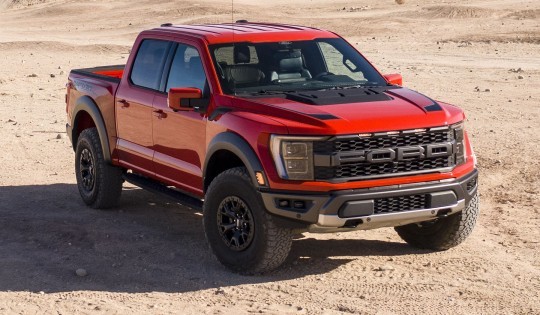 What Ford did reveal is detailed information about the redesigned suspension system, which now uses a five-link design for the rear wheels.

This should make the truck

With the cat out of the bag, namely the official (online) reveal of the 2021 Ford F-150 Raptor, we should all return to the usual order of business. Not yet, though, because there’s a tremendous amount of details to be shared about the off-road performance pickup, even though we’re still in the dark about some of the most important figures.

So, the Blue Oval is playing hide and seek with an entire world as far as the all-important horsepower and torque ratings are concerned. Instead, it is promising that’s just the first chapter, and a flagship Raptor R will be coming for the 2022 model year.

Naturally, that’s cause for its rivals – especially Ram – to make fun of the indecision and try to snatch the red carpet from underneath the 2021 F-150 Raptor. Frankly, there’s nothing anyone can do about it since Ford basically allowed the competition to

Today’s full-size pickup trucks already offer nearly everything but the kitchen sink, and the 2021 Ford F-150 is now attempting to become even more like your home or your office. Newly optional features include a foldable shifter and center console that creates a sort of desk or table, and lay-flat front seats that create a place to rest.

The so-called Interior Work Surface (pictured above) is an option for all trim levels of the 2021 F-150. In models equipped with bucket front seats, it’s enabled by a movable console-mounted shift lever

Ford is introducing the 2021 F-150 as an all-new truck. But when you get down to the details and look at this new generation of the best-selling truck, it doesn’t actually seem all that changed from the 2020 model. There have been a few exterior tweaks, the addition of some useful productivity features, bigger touchscreens, and the addition of a

Used Honda Accord For Sale Near Me

Used Toyota Tacoma For Sale Close to Me